Nearly 5 years ago two of my favorite hobbies collided...Transformers and video games...specifically the Sega Mega Drive (or Genesis in the west). Takara Tomy created a new line of Transformers entitled A.R.T.S. and the first (and only) releases were Megatron and a Sony Playstation themed Optimus Prime. 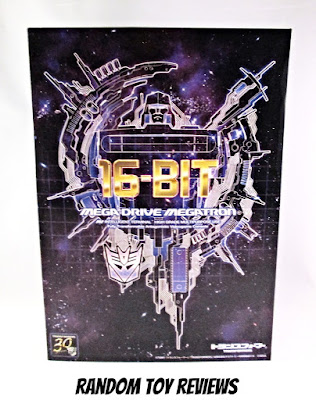 Even to this day I'm not sure how or why this collaboration happened, but I'm glad it did as it's one of the more interesting versions of Megatron in my collection.

Megatron comes packaged in a beautiful box with some nice artwork. The background has a nice space image with a transitioning G1 style grid in the center. "16-BIT" is very prominent in the center of box, which is an obvious reference to the original Sega Mega Drive video game console. 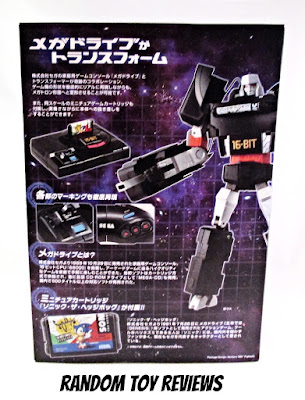 The back of the box has some nice images of Megatron in both his video game console form as well as his robot form. It also shows off some of the features of the toy such as the reset button on the console, the included controller and even a small Sonic the Hedgehog video game cartridge. 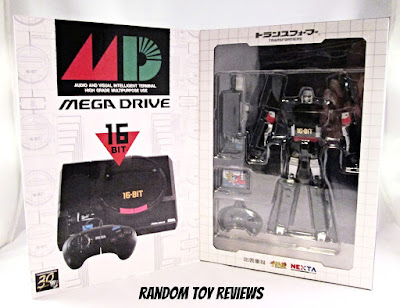 The front of the box is actually a flap that opens up to reveal Megatron in is robot mode. Inside the box flap you can see the classic Japanese Mega Drive logo that Sega once used, above the Mega Drive console. Leave it to Takara Tomy to have a beautiful overall presentation to this release. 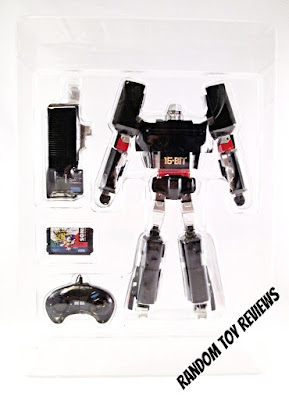 Megatron is packaged in a form fitting plastic tray. His "fusion cannon", Sonic cartridge and Mega Drive controller are also packaged beside Megatron. No twisty ties or plastic bands are to be had! I did have fight a little to get him out of his "plastic prison" however. 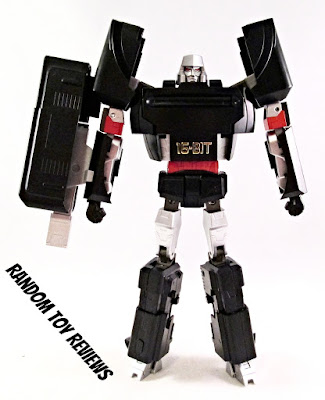 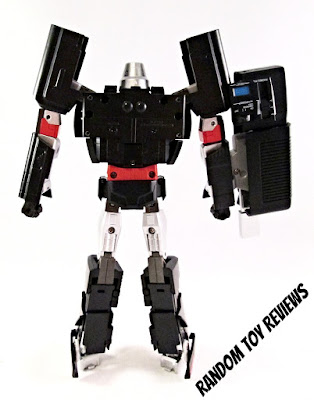 Megatron's fusion cannon is actually the side of the Mega Drive console. Front the front its not as obvious, but from the year you can see the console's reset button and headphone volume slider switch.

While some liberties were taken with the overall look of Megatron's robot mode, there is no mistake who this is meant to be. Just look at that head sculpt! I don't personally care how the 16-BIT logo looks on the lower portion of Megatron's chest, but overall I do like the look of the robot.

Surprisingly he features all your normal points of articulation in his arms, hips and legs. At first I had a hard time getting him to stand, but I later noticed I didn't have his heel pieces extended. 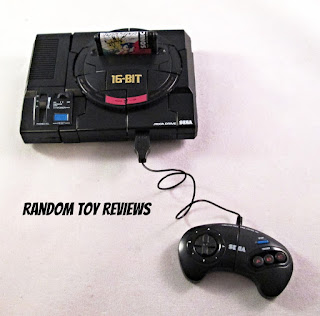 Where this toy shines in my opinion is in console mode. The detail they were able to cram into this thing is amazing. Granted this came out before the current Sega Mega Drive / Genesis mini video game console, this was the smallest version of the iconic hardware I have seen. All of the features are here...from the raised ring around the cartridge slot, to the blue power button and the headphone volume slider.

Obviously this is a non-working video came console, but I love how it also came with a tiny Sonic the Hedgehog cartridge and a controller that actually plugs into the console! By the way, the cartridge doesn't do anything. It doesn't transform, but it does have a nice re-creation of the original Japanese Mega Drive Sonic label. It can he inserted into Megatron's chest in robot mode...but why would you want to do that? 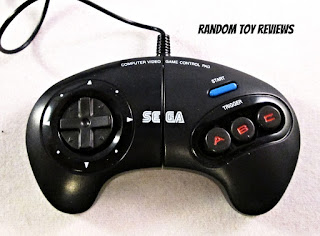 The included controller is modeled after the original 3 button controller. The d-pad does move as well as the face buttons can be depressed ever so slightly. As you can see from the line down the center of the controller, this does split into halves and can be stored on the back of Megatron in robot mode. I didn't care for this as it made it look like Megatron had wings and just looked silly to me. My other gripe about the controller is the cord is too short. It's a minor complaint as it serves its point and looks great when plugged into the console. 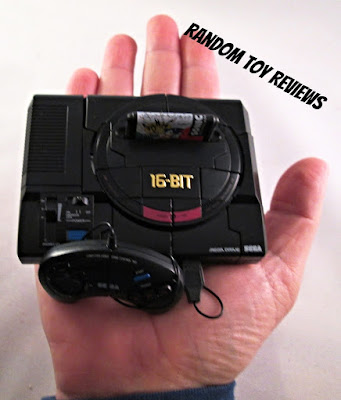 Since the release of both Megatron and Optimus, Takara Tomy has released several other Transformers outside of the current series. We've had transforming pens, cell phones and now I believe a watch is coming out next. I know these type of releases aren't for everyone, but in this case this was a marriage made in heaven for me. Today on the secondary market this version of Megatron may set you back $100-$150. It's a fun piece, but definitely for die hard collectors only.
Posted by flywheels at 2:59 PM 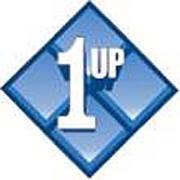